Imagery can be a powerful technique to increase sporting performance. Endurance athletes can imagine their body to be light and easy to carry. Cyclists could imagine their legs to be an engine that just keeps turning solidly.
The key here is the need to think about the characteristics your sport needs. For instance the 100m in athletics just need an explosion of power, so imagining your legs being light might not help here. Instead imagining your legs being coiled springs ready to spring with large amounts of power would be more effective.

However what I am suggesting here is that it is possible to take this idea one step further and create a whole persona which will compete “in your body.” This technique has already been used to Olympic success under the guidance of one sport psychologist I am aware of and I believe it is possible to use in many situations and sports.

It is often talked about: the need to “get into the zone” in order to give your best performance. What if it is possible to almost separate this into a frame of mind associated with a certain meaningful mental image. Imagery can then be used to remember effectively this mental image and the associated “zone” will then follow. This would make something that seems almost extraordinary and a uncontrollable phenomenon (the idea of “being in the zone”) into something that can be channelled and called upon almost at will.

Sounds great? If you can do this effectively then it has the potential to be. So how do we get this mental image associated with this optimal performance zone?

Firstly just like the imagery mentioned earlier you need to think about the demands of your sport. However you also need to include the mental requirements here too. Since my sport is table tennis I will use this as an example.
Table tennis requires speed, agility and fast reactions. However, it also requires a calmness, clear thinking, and control over emotions.
An image that I find to fit with this is the idea of a ninja! A ninja is quick, agile and sharp. When a ninja makes his move it is the correct move and is efficient and they make it count. A ninja is also always in control of himself, relaxed, smooth and calm in any situation. Sounds like a ninja would be ideal for the situation of a table tennis match!
Therefore if you can get into this sort of mindset you too will be in the ideal frame of mind to play the match. 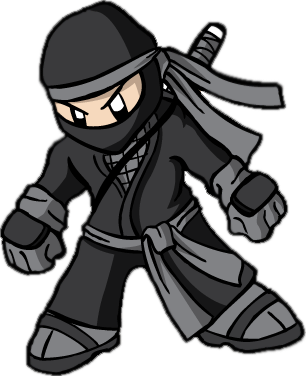 To do this you need to practice the imagery of “Becoming” the ninja. Imagine yourself as the ninja. Look at yourself and see the ninja robes on your body, look at your bat and see the ninjas sword, gleeming, ready to strike with accuracy and speed. The key is to not just imagine being the ninja but become it, and ALL of the characteristics that come with it, physically and mentally.

Obviously, the “ninja” may not be appropriate for your sport, or yourself. So give it some thought, come up with an idea you like and give it a try. This technique won't be for everybody, but for some people this can be very effective.
at Monday, August 26, 2013